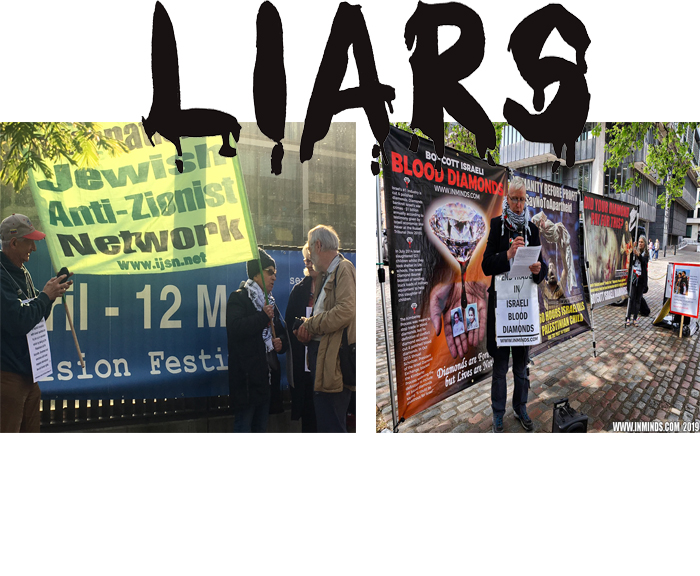 Back on the street, lies, the JW3 and bloody racists

Spring is here and the anti-Israel activists wake from hibernation, brush the dust from their racist banners and take to the streets once more. It is going to be a busy season. Over the coming weeks, several large anti-Israel demonstrations are planned. Just a few days ago, on Tuesday 30 April, a small but twisted demonstration took place outside the JW3, a key Jewish cultural centre in London.

It started with a lie

As is often the case, this anti-Jewish demonstration started with a lie.

For thousands of years, people have made up lies about Jews in order to stir up hatred against them. They’ve been blamed for everything, from deicide to spreading the plague. Most modern antisemitic falsehoods are told about Israel and its defence forces. Where once Jews were the baby-killers, now it is the IDF. In reality the majority of IDF forces are 18-21 year-old conscripted Israelis – just as British youth used to be conscripted. Thankfully, the British need for conscription has passed. The UK is an Island in a conflict free zone. The US is a massive nation far from its enemies. Israel is in a toxic neighbourhood. On its borders are some of the most dangerous radical Islamic ideologies on the planet. Israel needs conscription and the IDF protects Israel and saves lives.

Much of the information spread by anti-Israel activism is either an outright lie, entirely distorted or told completely out of context. These anti-Israel activists are spreading lies about Jews, just as antisemites always have done.

The call for a mass demonstration at the JW3

On Tuesday, there was an event held at JW3. It was part of ‘Seret UK‘. the Israeli film festival. Letters appeared in a local Camden newspaper, signed by a group called the ‘International Jewish Anti-Zionist Network’. The network is one of the twenty-five or so identities used by the fifteen or so active anti-Zionist Jews. The three signatures on the letter were Selma James, Michael Kalmanovitz and Sam Weinstein. The letter mistakenly argued the event was part of a recruitment drive by the IDF.

Gerry Downing, who has been expelled from the Labour Party, took it further: 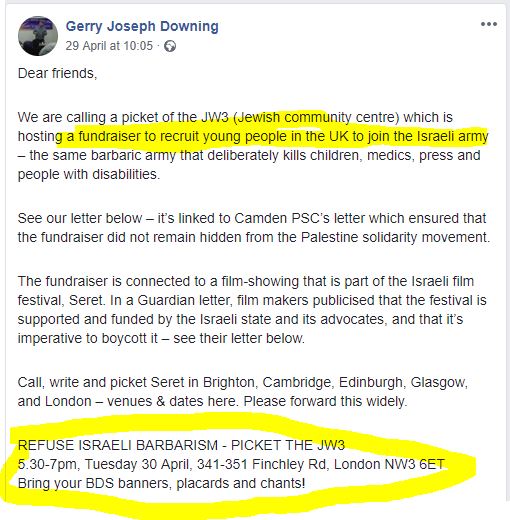 Downing suggested that the event at the JW3 was a fundraiser to ‘recruit young people in the UK to join the Israeli army’. The lie had been told, the event was created – a ‘picket’ of the JW3. Just as recently there were calls to ‘march on‘ a synagogue, now we had people making up lies to ‘picket’ a local Jewish community centre.  Other well known anti-Israel activists turned the event into a ‘recruitment fair’:

In reality the JW3 event was about the ‘lone soldiers’ program, by raising funds for Garin Tzabar, a system set up to help soldiers who have made Aliyah, who do not have the support network of a family. But that isn’t really the point. As those behind the ‘picket’ made clear, they supported a boycott of the Israeli film festival anyway:

Lies told, demonstration against the JW3 organised. And a local Jewish community centre had become the target of a protest.

So who would turn up? Despite the major coverage the event received online, almost nobody came. There were few surprises. Moshe Machover was there. Machover once told students who had asked him a question at a university event, that they had been sent ‘by the Israeli embassy’. Tom Suarez was there too. Suarez authored an antisemitic book full of hate, lies and historical sloppiness. In total about 20-25 protestors arrived. All the usual suspects you expect to see at these demonstrations. The same few faces every time: 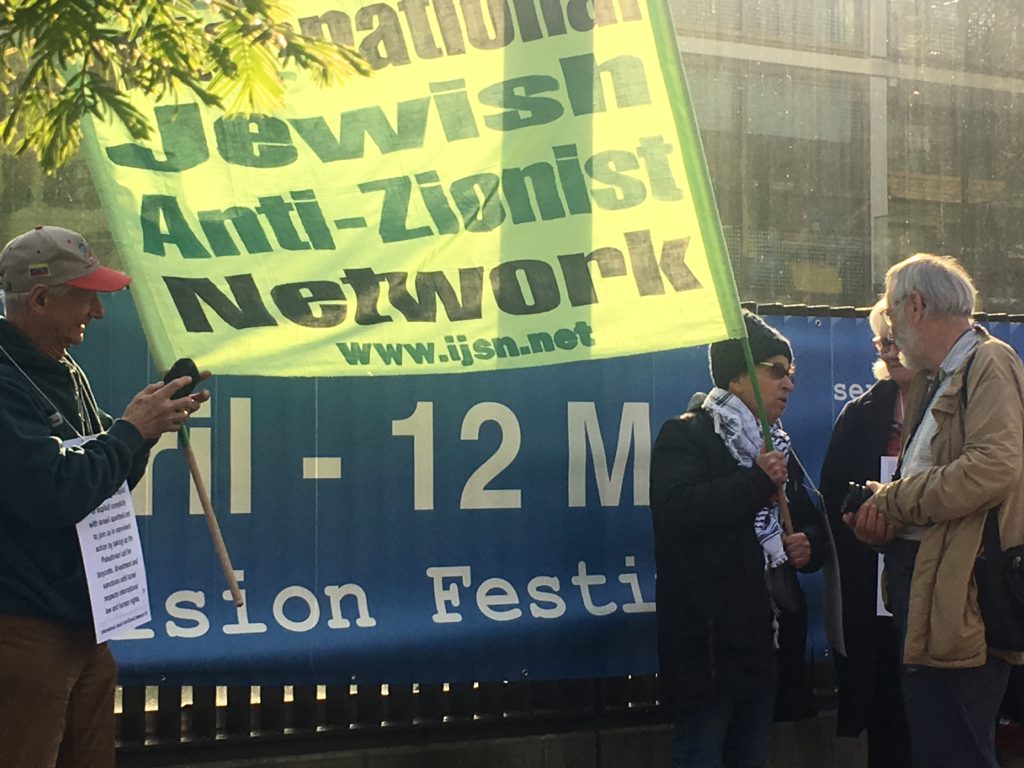 JW3 Chief Executive Raymond Simonson referenced a previous demonstration that had taken place outside the JW3, on that occasion it was against Ehud Barak, and he pointed out that it was by ‘the same seven or eight people with big banners’. He was wrong, but more on that shortly.

The perverse BAME demonstrators outside the JW3

Despite the large banner, the protestors were not all Jewish. And when it comes to Jews, nobody gets things more twisted than some BAME activists. There are some Jewish people – a tiny minority- who would like to see the Jews assimilate and disappear completely. They are the modern day version of the communist Yevsektsiya.  Jewish Voice for Labour, the Jewish anti-Zionist Network, Free Speech on Israel and J-BIG are just some of the names this small group operates underneath. The vast majority of Jews take pride in their heritage, only a handful do not. So, who should BAME activists stand alongside? Only with Jews do things so clearly become twisted. Only with Jews would BAME activists stand alongside those who want to oppress the minority group and make it disappear: 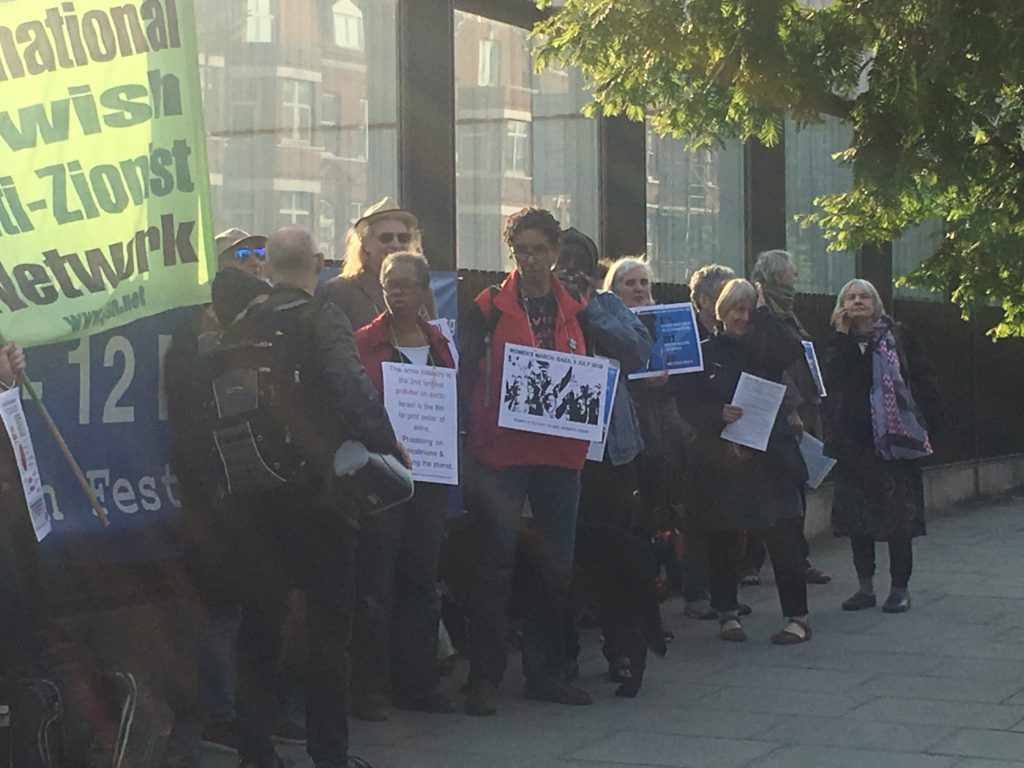 In total about 30% of those standing under the International Jewish anti-Zionist network banner were not Jewish. There were about three BAME activists present. People who are meant to stick up for minority groups, standing alongside those attacking the minority group. The two BAME activists in the picture were Sara Callaway and Cristel Amiss, both apparently women and BAME officers for the local Hampstead and Kilburn CLP. As Rob Yeardley asks in his tweet, how confident would Jewish women be, bringing issues to the attention of these two fools:

The demonstration itself was predictable. The anti-Israel activists managed to hand out a few leaflets, but hardly anyone was interested. There were a small group of counter-protestors and the two sides shouted at each other. Every now and again the demonstrators would sing ‘free, free Palestine’ or some other well-worn activist song, but they were few and number and fewer in voice. The more I see this group, the sadder they seem to look. For the most part these are people who in the 1970s would have already been veterans of CND marches.

At some point, a man walked past who seemed to know those demonstrating. They gave him the microphone and he began to spew conspiracy theories about Hamas and Israel. It was complete balderdash and aimed to blame Israel for Hamas rather than the Palestinians that voted for them. The Jews can be blamed for everything. I noticed those demonstrating seemed overjoyed that someone who appeared to have something to say had control of the microphone. I didn’t know who he was, and to be honest I thought I’d never find out. We need to be thankful that their need to lie and demonise has no limits. The man identified himself when he chose to upload a post to Facebook in order to lie about what occurred at the demonstration: 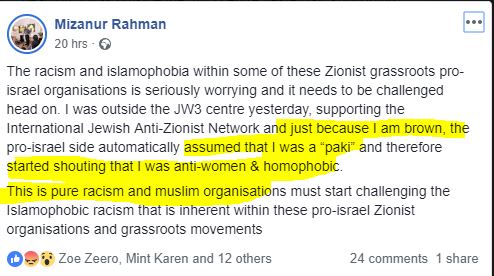 Mizanur Rahman claimed the counter-protestors (there were about five) had been hurling racist abuse at him. Thing is, I have the footage from the event. At no point did anyone say anything such as Mizanur suggests. Nobody, even once, shouted anything like ‘Anti-woman’ or ‘homophobic’ in his direction. Which means he is blatantly lying to demonise the Zionists. He has knowingly created a false accusation of racism. How vile and disgusting is this? But as I said at the beginning, people do like telling lies about the Jews. Here is Mizanur on Twitter talking about global Zionist control:

That is who tells lies about Jews outside a Jewish community centre. One wonders how Mizan would feel if some racists had decided to picket a Mosque.

One anti-Israel protest in a single day is not enough. On the same day another demonstration took place outside the QE2 building in London. It was organised by the Islamist group Inminds. The public face of ‘inminds’ is a well-known antisemite Sandra Watfa, she of the #jewnitedstates hashtag. Watfa does not appear to have been at this demo however, and her absence was covered by Derek Jardine. This is Jardine leading the protest: 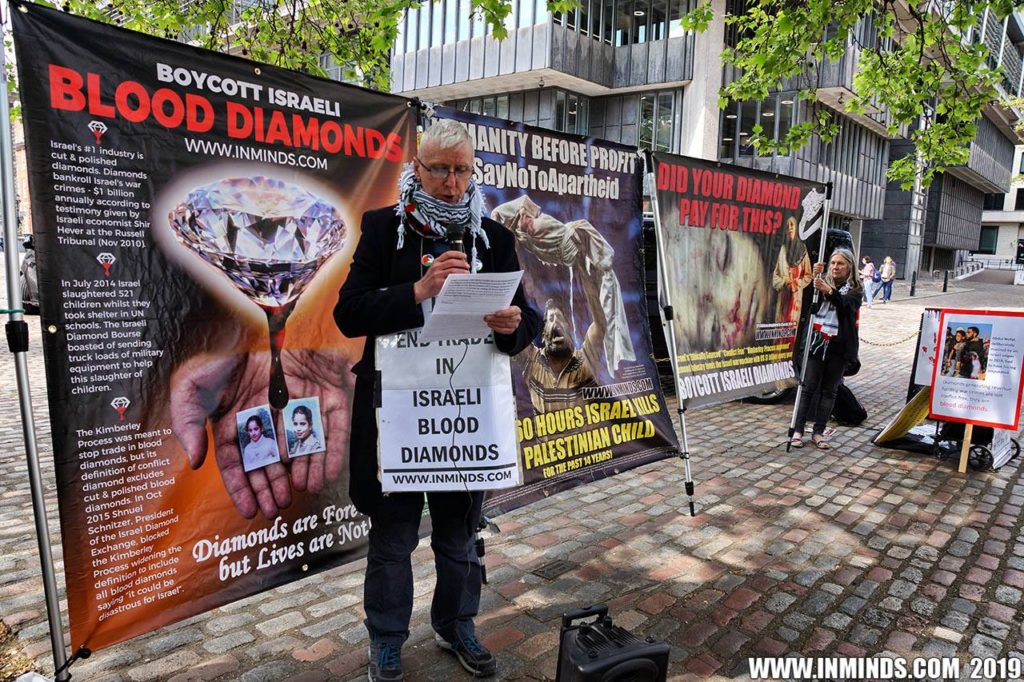 Like most of Inminds activists and the majority of anti-Israel protestors, Jardine is a conspiracy theorist obsessed with Jews. He shares posts from those like Atzmon, is friends with some rabid far-right racists and I have presented evidence before of his 9/11 and Mossad conspiracy posts. For those in any doubt, here is posting from a white-supremacist website: 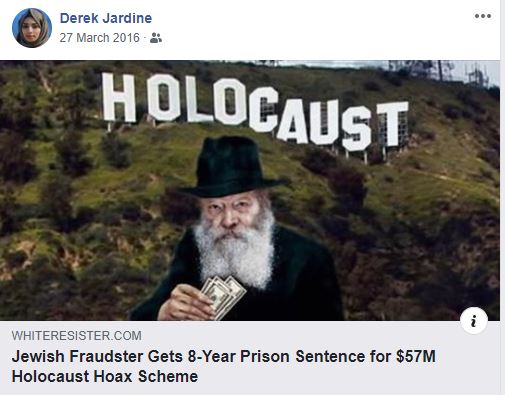 The website is now called ‘dailyarchives.org’, but when Jardine posted it, the website was called ‘whiteresister.com’, a name that leaves little to the imagination. These antisemites lead demonstrations against the Jewish State under a mask of ‘humanitarian concern’, but when you strip away the thin layer, you find neo-Nazi, white supremacist material every time. To bring it full circle, the banner that had waved outside the JW3 in the protest against Ehud Barak wasn’t the anti-Zionist Jewish network, but ‘inminds’. This image is of Holocaust denying antisemite Sandra Watfa (dead centre) protesting outside a Jewish community centre: 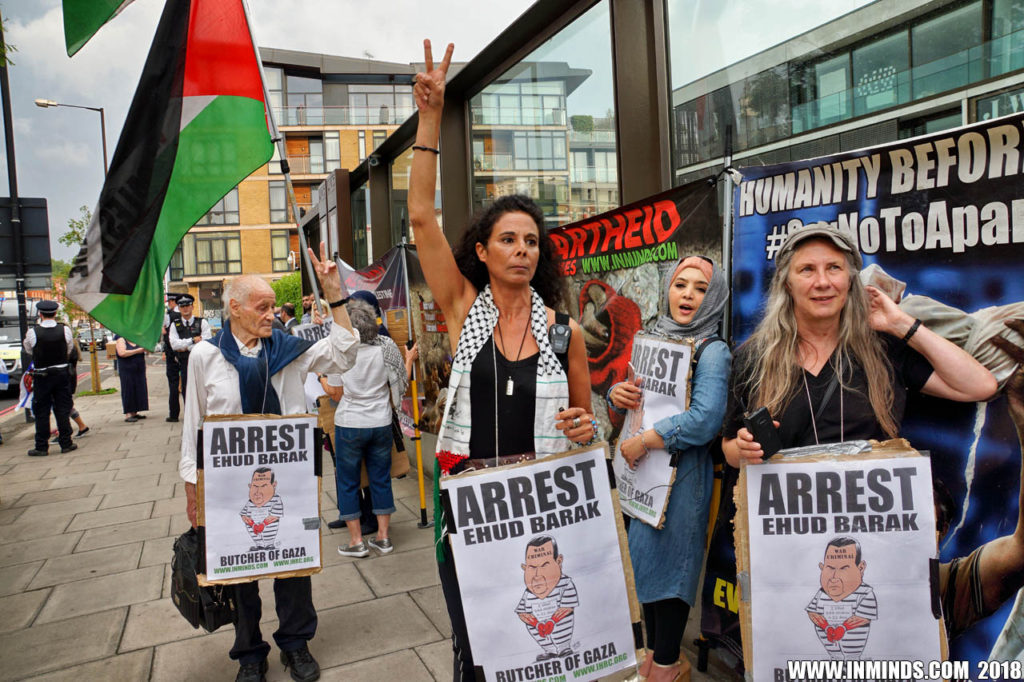 Racists – out on the streets of London – openly demonising the Jewish State. Lies, lies and more lies. It is only the beginning of May, with the political environment so fragile, 2019 has all the makings of a very long year.

188 thoughts on “Back on the street, lies, the JW3 and bloody racists”