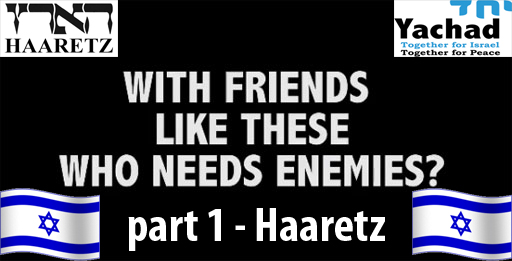 A journey beyond Zionism – part one – Haaretz. 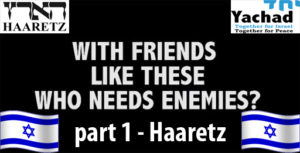 Truth is I had placed myself on a month long self-imposed exile from all my research into the anti-Zionist camp. I reasoned I needed a holiday, a break from the venom, the hatred and the antisemitism.

The theory had been that if I replace Electronic Intifada with the Israel press and Counterpunch with Jewish media in the US or UK, I would be able to switch off and relax. In hindsight it was a mistake to think it would be a detoxifying experience. After just two weeks I basically end up asking the question. With friends like these – who actually needs enemies?

Let me begin with a point of clarification. I do not as a rule, attack the politics of the Israeli left. It isn’t that I agree with them – I don’t. In part I understand their anxiety, their moral conflict, but my response to all those who simply wish to ‘end the occupation’, is always to ask a simple question – “how?”

Opposition politics is always easy, it’s just naysaying and grandstanding. It is difficult to think of a better example of this than the position of the far left in Israel. The naïve belief that all that is wrong is embedded in the ‘occupation’, the flimflam argument put forward by those who think that somehow, the conflict would end (or be less harmful) if Israel would just ‘play nice’. So if you ever want to see true confusion, take a supporter of Meretz (Israel), Yachad (UK), J-Street (US) and ask them how exactly they intend to ‘end the occupation’. What does it all look like a day after?

For the most part these movements are astroturf organisations, the expensive playthings of fools with too much money. However, my research focuses on anti-Zionists, not Zionists with whom I have disagreements. So I leave them alone when they leave me alone. However, at times like this our paths do cross, and over the last few weeks I experienced two incidents of what I can only refer to as ‘press rage’ (I would define ‘press rage’ as the point where I begin to throw random heavy items having read an article I took extreme exception to).

The first article was in Haaretz. I made the mistake of reading an online Haaretz piece penned by Gideon Levy. The second was a hatchet job in Jewish News that directly affects me and attacks my own political position. The article in the Jewish News also has far reaching implications and creates an impossible environment for Zionists in the UK. This piece is a response to those attacks on Zionism. Let me deal first with Haaretz.

Simply writing a piece slamming Haaretz for picking on Israeli policy isn’t really a worthwhile exercise today. We have long since passed the point of Haaretz being recognised as anything but a bitter media outlet drowning in its own extreme agenda. It no longer has a relevant readership inside Israel at all, and if it were not for the global fanbase of Israel’s rabid haters, Haaretz would long ago have either sunk completely or began to swim in another direction. Yet the question remains, how far gone are they?

We all understand partisan media. Everyone knows which way the Mirror leans, what the Express or Daily Mail are going to push. The Guardian, Telegraph, they all have their agenda. Yet the audience is almost always identifiable. Think of a paper and we can all draw a stereotypical image of its readership.  If it’s a paper that stands in opposition to our own political position, we tend to draw a caricature. There’s nowt wrong in that.

Every paper, in almost every country around the globe, has celebrated some national achievements in Rio over the last few weeks. Just look at the euphoria in the UK, where sport had become our headline news, 24 hours a day, 7 days a week. Even a suicide bombing at a wedding, couldn’t stop the party. The Mirror, the Sun, the Guardian or the Times, they all represent different elements of the British electorate, yet they all celebrated Rio. Can you imagine if a newspaper in the UK couldn’t celebrate any national moment of pride? What type of paper would that be?

Enter Haaretz. For a newspaper always seeking an angle, any angle, to attack Israel, Olympic medals present a challenge. How do you take a glorious sporting achievement and depreciate it? How much spite and hate do you need, to refuse to allow your readership to enjoy *any* success with an Israeli flag? Who is your enemy, is it the government? is it the flag? is it the people?

Gideon Levy’s piece following the Israeli bronze medal performance by Yarden Gerbi was a disgraceful milestone in the history of the decline of Haaretz. Haaretz isn’t the ‘Guardian’ of Israel’s media, because no UK paper would survive fermenting this type of venomous hatred against the state itself.

It isn’t that Haaretz doesn’t get national pride. Just one week later, Ahmad Abughaush, a 20-year old student from Amman won a medal, and Haaretz, did everything possible, to adorn Jordan’s first medal on Abu Gosh. Suddenly it is possible to react with unbridled pride to a sporting achievement. You can hunt down ancestry to make a claim and you can bring ‘great honour’ to a town you have never seen. For Haaretz only when Israel wins a medal, is a celebration ‘exaggerated out of all proportion’.

There were other headlines too, “Mixed Fortunes in Olympics Do Not Bode Well”, “Israeli Rhythmic Gymnasts Fail to Fulfill Last Medal Hopes”, all the usual Haaretz offerings. What Haaretz cannot do, is openly celebrate anything that Israel achieves. Even for achievements that are not political in nature, the Haaretz line has to persuade the reader that the Israeli flag is somehow tainted. Everything is twisted to a political point. This goes way beyond anything we would be used to in a media outlet elsewhere in the west.

The Tower published a piece titled “Downfall of a Great Newspaper” earlier this year, that focuses on Haaretz. It is well worth reading. In the last 12 months I have seen Amira Hass draw a comical (?) reference to ‘Elders of Zion’ and Gideon Levy make comedy with Israel hating revisionist Illan Pappe. Haaretz is an outlet that is sick, sustained only by those who wish to see the demise of Israel. If you took the true haters away, there would be nobody left sharing the Haaretz articles at all.  As someone who often reads Electronic Intifada, when looking at Haaretz, I can honestly say that it is difficult to see the difference.

The second piece in this series, looking at the horrific article in the Jewish News will follow in a few days. You can get a notification when the second piece is released by subscribing to the blog using the link on the page.

4 thoughts on “A journey beyond Zionism – part one – Haaretz.”