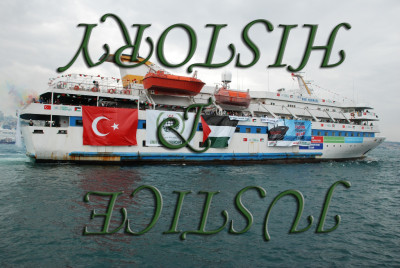 How Gresham College turned history and justice upside down 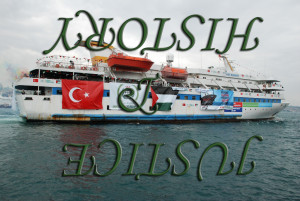 I didn’t get to go to and see the talk last month by Professor Sir Geoffrey Nice at Gresham College, but having watched the performance on video, I made certain I was going to be there for the second event. Whilst last night’s speech was focused mainly with the events on the Mavi Marmara in 2010, the first speech had been a more general discussion of the Israeli conflict with Hamas and the 2014 events in Gaza.  What was said in the first speech can be surmised simply by Geoffrey’s short and one-sided introduction to the history of the conflict.

Within the confines of this history, the one he retells as if it were factual, Sir Geoffrey suggests that we now need to look at and assess Israel’s current actions in Gaza. Unfortunately, the entire position is simply historically inedible. It is not even worth properly addressing such a timeline. It is I think, fair to say, Sir Geoffrey has taken up a position of prosecutor, carefully selecting incidents, ignoring others and manipulating the data to press home his case. Whatever followed in that speech is of  no value because Sir Geoffrey Nice has simply discredited himself entirely with his opening remarks. From that history, no truth will ever be found.

I will however use one specific example to highlight how distorted the image created. When implying Israel was a nation that sought expansionism and war, Sir Geoffrey Nice said this:

“The Oslo Peace Process… with Yitzhak Rabin’s willingness to negotiate, the first Israeli Prime Minister who was willing to do that”

And yet Ben Gurion, the very First Israeli PM, accepted partition as a Zionist leader in 1936 (this led to the break with Jabotinsky) and again in 1947. In the first Israeli Prime Minister’s opening remarks, the first official statement of Israel, the declaration of independence, there is this:

WE APPEAL – in the very midst of the onslaught launched against us now for months – to the Arab inhabitants of the State of Israel to preserve peace and participate in the upbuilding of the State on the basis of full and equal citizenship and due representation in all its provisional and permanent institutions.

WE EXTEND our hand to all neighbouring states and their peoples in an offer of peace and good neighbourliness, and appeal to them to establish bonds of cooperation and mutual help with the sovereign Jewish people settled in its own land. The State of Israel is prepared to do its share in a common effort for the advancement of the entire Middle East.

Now Sir Geoffrey is free to ignore whatever snippets of information harm his case, he can even suggest that the realities on the ground in 1948 were already beyond such declarations, but he cannot discard Ben Gurion’s acceptance of both the 1936 and 1947 partitions. These are both historical facts. As are the negotiations that took place in 1949, where Ben Gurion offered to annex Gaza and absorb every last refugee residing there in an attempt to solve the conflict within a two state paradigm. Nice is simply turning history on its head.

However, as easy as it would be, I have no intention of tearing the history apart point by point, and having watched the October speech again in preparation for writing this piece, I can say with conviction that yesterday’s talk was far more mundane. Perhaps having done the groundwork last month, there was no need to set the scene any further. If anyone is expecting a full blown attack on Nice, pointing out that he has a personal dislike for Israel, then I am afraid I am going to disappoint. In truth I found a rustiness in Sir Geoffrey’s rendition of the history, as if the entire back-story is foreign to him, and he were reading  it from a script for the first time. This is not a man who has a deep understanding of the conflict at all and he does not speak its language ‘fluently’.

My style is rarely personal. I lean towards logic and research, with history providing context and logic doing the maths. This is my way of working through and taking a position on complex issues. I always prefer to play the ball and not the man. Sir Geoffrey Nice operates differently. Nice is apparently a first class Barrister, he exists within the law and for him, the world is the law. If born 200 years ago, this man may have been prosecuting gays with the same fervour he today attacks the IDF. He may have done so because he could raise a legal argument that some of their alleged activity was against the law. Right or wrong, morality, logic and fairness are issues addressed by the lawmakers and those that intepret the law (the parliament and judiciary). Even as a supporter of human rights, Nice would almost certainly use current internationally accepted law to define the boundaries of that specific paradigm.

So I leave it to those of a similar operating strategy, lawyers, to address the legality of the ‘right to protest on the high seas’. This is of no interest to me. My role, the role of all of us ‘laymen’, should be to ensure that if there is a fight, then the arena is fit for purpose, the evidence that is brought forward is untainted and the judges are fit to try the case. Failure on any of these three points renders the process unviable. You cannot try a man unless you can give him a fair trial. And this is where Sir Geoffrey and I simply part company completely.

Lord Bingham, in his essay on the rule of law posited that:
“the laws of the land should apply equally to all, save to the extent that objective differences justify differentiation”.

Equality before the law is seen as a cornerstone of the constitution. If you remove this as a requirement, as an absolute necessity, you cannot fail but to enter the realm of discrimination and persecution. Our society would regress hundreds of years, if such a precious position was allowed to slip away. Within the UK, with a separation of powers and lawmakers who answer to the people, our system operates precisely within this ‘rule of law’.

But how does that extend beyond our borders, where we have no say or control over how other nations behave? Within the law, there exists ‘equality amongst the nations’, so what we feel in the UK, what we represent, 1000 years of struggle for rights and a long history of democracy and freedom, has no more weight in international law that the whim of those like Assad or Gaddafi or Saddam Hussein. And when it comes to a vote, we find ourselves outnumbered 3-1. To someone like me, it is fundamentally perverse, to those like Sir Geoffrey Nice, it is the law. He may not like it, but he will operate within it. I have no reservations in rejecting it entirely.

For as long as the United Nations and indeed almost all international bodies, reflect their component parts without prejudice, I am not interested in what they have to say. It may help the world turn, economies flow and for those reasons, I do not suggest abolition, but on the matter of justice, on issues such as guilt and innocence, the politics behind the UN renders it a modern and expensive version of the ancient witch trials. The UN is a political version of FIFA, just as corrupt, just as easily purchased, just as incompetent. Given the clear, indisputable UN obsession with harrassing, stalking and discriminating against Israel, there is absolutely no logical reason whatsoever why anyone should take any notice of anything it says on Israel at all.

So we are left asking not whether Israel is or is not guilty of war crimes, but whether the question itself is discriminatory and part of a persecutory strategy against a specific state? That is the issue that needs to be addressed first. I would ask Sir Geoffrey if the accusation against Israel could be levelled against the US, UK, France, China and Russia if different international political powers held sway? Aren’t each and every one of these nations guilty of spilling blood, and this without even the self defence argument to hide behind? Well, yes of course they are. But the international will isn’t there, so the international lawyers leave them alone and tens of thousands if not hundreds of thouusands of civilians die each year in conflict with not an action brought against any of those responsible. With Israel it is different. Regardless of Israel’s security nightmare, regardless of Israel doing its utmost to reduce casualties, there are enough nations in the lynch mob, for the money to do its work, and the lawyers line up ready to take Israel to the international courts.

Understand this point. If Syria, Libya, Iraq, Yemen, Egypt, Saudi, Qatar, Lebanon and so on were not involved, nobody would be talking about Israel either. It isn’t about what Israel is or is not doing, it is about the political will of despot led nations using and abusing the international stage. And with an entire industry created to deal with the legalities of international conflict, who would turn down a rare opportunity to fight? They don’t address what is logical, what is fair, what is right, they only address what is the law. It is for others to worry about the justice behind that law.

And then behind all these accusations, there is the rendition of events detailed in last night’s speech. And as I heard Sir Geoffrey talk I realised I have heard all this nonsense before. That it was a humanitarian aid ship (MV Mavi Marmara), that it didn’t matter if activists were on board, that Israel’s response was disproportionate, that Israel is responsible for Gaza’s plight, and so on and so forth. It is all the tired old accusations of the Arab camp, regurgitated and re-presented over and over again. Just as they are doing right now with the brutal knife attacks against Israeli civilians. And as the history of the event described last night was built on the fairytale that was told in the previous lecture, it is no surprise that what was detailed was unrecognisable from the actual historical event.

There is a simple truth. If Israel was not Israel but one of the major powers, everyone knows this conflict would have ended decades ago. Israel’s weakness is political isolation in an international world where all states are absurdly counted equally and Israel’s neighbours present a numerically and economically important ‘block’. What is also likely is that had one of the major powers faced an incident such as the one involving the MV Mavi Marmara, the vessel would never have made it to shore and very few people today would even remember its name. Most certainly last night, Sir Geoffrey Nice would have found something different to speak about. The action isn’t what is relevant here, the identity of the state behind the action is, and that within the ‘rule of law’ is simply persecution.