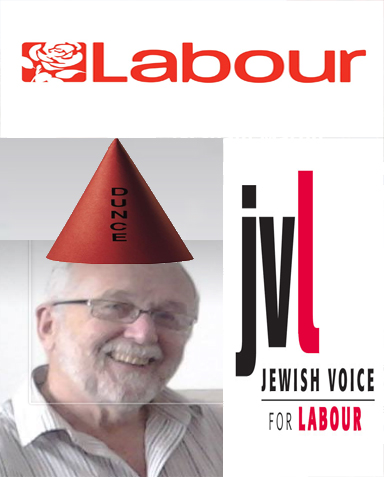 The antisemitism problem inside the Labour Party is turning from bad to shameless. Just this week, there were two more public incidents. Potential Labour candidate Nasreen Khan was dropped in Bradford for making antisemitic remarks on social media. Jewish News ran the story, but the question remains how even now, these candidates are not being properly vetted by the system. In another example, Labour ‘withdrew it’s endorsement‘ of Billy J Wells in the Bradwell South and Hopton council election, also following the discovery of controversial social media posts.

Labour have two stark choices: They can either deal with the problem head on and attempt to rid the party of antisemites, or can suggest antisemitism isn’t actually a problem at all. As it stands, elements inside the Labour Party are now busy doing the latter.

A few days ago an article was published on the ‘Jewish Voice for Labour’ (JVL) website. It was written by ‘Dr Alan Maddison’. Maddison is listed as an ‘Independent Strategist and Associate Member of JVL’. Dr Alan Maddison is not an impartial academic. Maddison is a Labour Party activist on the ‘left’ of the party spectrum.

For those who might recognise the name, it was Maddison, alongside the disgraced Tony Greenstein, who a year ago attempted to discredit John Mann over a letter written by a 90-year-old Holocaust survivor. It was Maddison who broke the story on Twitter of his 90-year-old ‘friend’s’ letter, Greenstein also picked it up.

Seemingly arm in arm with Greenstein ever since, this was a Maddison response on one of Tony’s blogs on the incident:

So according to Maddison, the fight against antisemitism in Labour, which he clearly sees as little more than a strategic weapon against Corbyn, ‘must be stopped‘. John Mann became a target for those on the far left, because of his fight against antisemitism, and the incident with Ken Livingstone. The middle man in the story with John Mann was a certain ‘Graham Martin’, who according to Greenstein had ‘helped’ Dr Glatt to write the original letter. Oddly, Martin created his Facebook account in August of 2016, just a few weeks before he was able to confirm the validity of the letter he wrote for Glatt. 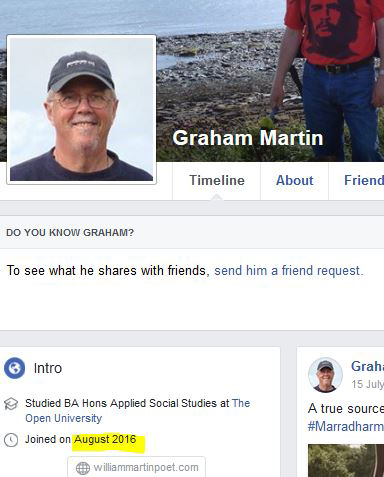 As a point of interest, Graham Martin still doesn’t have many Facebook friends. Less than sixty in fact. They include Jacqueline Walker, Mike Cushman and Alan Maddison – three of the cream of the JVL crop. That little quirk may have been that, except the core element of the story wasn’t really new at all. This is a Maddison article from over a year earlier, August 2015, when Maddison went round to Dr Glatt and ‘spoke to him’ about his reflections on Corbyn and antisemitism. Perish the thought they found a better use for their friend a year later. Cynical. It is all quite shameful really.

So it is perhaps unsurprising that Maddison was chosen as JVL’s ‘independent strategist’.

The JVL / Maddison article opens with the question ‘How serious is the threat of antisemitism in Britain today?’ and follows with another – ‘are British Jews the target for more hate crimes than other victim groups?’ At no point in the article, is the threat of antisemitism, nor the issue of ‘targetting’ Jews, ever covered. The piece simply tries to belittle antisemitism with an entirely misplaced and deeply flawed interpretation of crime statistics.

The first point of note: Here is an academic attempting to do a detailed analysis of a subject, without understanding it at all. Maddison doesn’t know what antisemitism is, he isn’t an expert on it, disagrees with the government’s accepted definition of it, and even stands in opposition to the mainstream Jewish community on the matter. Yet for some reason (remember he is desperate to ‘stop’ the antisemitism argument in Labour’), he pushes himself into the frame as the expert.

So what does he do? Maddison begins with some headlines about the high threat of antisemitism, and then says ‘however, these headlines do not seem to reflect the true picture’. What he wants to do is clearly brush the ‘threat’ away. Then begins a quite ludicrous and mindless abuse of statistical data using five different data sets to quickly conclude that:

The alarmist headlines are neither justified nor helpful. The pro-rata risks for hate crime are small for Jewish people and the risk for a violent crime lower than for those people from other races or religions.

Let me just address some of the ridiculous mistakes Maddison has made.

Take point number four: ‘A Jewish person is 50 times more likely to suffer an assault unrelated to antisemitism’. Maddison has taken national crime statistics of violent attacks, and simply divided the total by the number of antisemitic assaults.

This is the research level of a fourteen year old. Violent attacks are not a constant, they differ from point to point. Maddison is suggesting someone from Radlett or Bushey suffers the same level of violent crime as someone from Bradford, Glasgow or Cardiff. There is more. Violence is also related to drug use and alcoholism. If Jewish families are less likely to encounter either, this would reflect on the risk levels. And the variables continue, unemployment, lifestyle, education, the family unit – all factors in evaluating risk. How many Jewish teens are in gangs? None of any of this is taken into consideration. None of the samples are weighted – The 50x statistic is entirely bogus and Maddison is a fool.

Yet this isn’t even the gravest error Maddison makes. For an antisemitic attack, surely the Jewish person must be known to the attacker or visibly identifiable as Jewish. So the comparison of all blacks against all Jews becomes unworkable. A Jew, fearing antisemitism, removes either his ‘kippa’, or ‘Star of David’ from his person before going out in public. The black person has no such luxury. This submissive result of high levels of antisemitism is a classic sign of a persecuted minority, and yet the good ‘Dr’ Madison, ignores it. I call this ‘Maddison’s Folly’.

Because of the ‘identity’ issue, ‘Jews’ cannot count as a whole number, the way other minority groups can. The question becomes – how many Jews amongst all the Jews are visibly Jewish – only they can be counted as the representative number of the entire community.

I am absolutely convinced that if all Jews dressed without any religious markings or dress whatsoever, then antisemitism crime levels would plummet. Black racial attacks would remain constant. Does that mean antisemitism would be over? This is the Maddison formula. Insane.

Then there is ‘Maddison’s second folly’ – take the CST. The CST secures over 1,000 communal events each year. When Jews gather as Jews, there is always a protective barrier in place around them. At the state level, my child goes to school behind an additional layer of protection. Dr Alan Maddison is either absurdly implying the levels of antisemitism would remain constant if that layer of protection was removed or all his conclusions are bunkum.

Then there is ‘hostile surveillance’. Does Dr Maddison even know what it is? What the CST does? What of those strangers that monitor Jewish sites, take photographs, are spotted, and deterred by the able defence?

Take two banks. One completely unguarded, the other guarded. The protected one holds diamonds, the unprotected one, Gold. Maddison is suggesting because the people take the Gold more than the diamonds, it means the people want the gold more. A schoolboy could do better than this.

Dr Alan Maddison wrote the report for the new group ‘Jewish Voice for Labour’ (JVL). Some of the central figures behind this group are actively trying to belittle claims of antisemitism. I can provide two personal examples. My own research produced two large reports on hard-core  antisemitism inside anti-Israel activist groups, one on the Palestine Solidarity Campaign (PSC), and one on the sister group in Scotland, the SPSC.  The research was careful to avoid all reference to criticism of Israeli policy. As the Scottish Sunday Times suggested ‘ you would have to work very hard to be included’ as someone who shares antisemitic material. Yet the only response of key figures in this JVL group was to belittle the two reports into Jewish conspiracy theory and Holocaust denial. They never do anything but defend antisemites. This latest article fits the pattern perfectly.

These are people inside the Labour party actually defending racial hatred. Sickening.

Jeremy Corbyn needs to clean the Labour Party of antisemitism. He needs to publicly state that the party adopts the IHRA definition in full. This stance needs to be fully supported by the unions, and they all need to entirely reject the attempts of this insidious and underhand group to belittle racial hatred.